Free to Play: The Movie

FREE TO PLAY is a feature-length documentary that follows three professional gamers from around the world as they compete for a million dollar prize in the first Dota 2 International Tournament. In recent years, E Sports has surged in popularity to become one of the most widely-practiced forms of competitive sport today. A million dollar tournament changed the landscape of the gaming world and for those elite players at the top of their craft, nothing would ever be the same again. Produced by Valve, the film documents the challenges and sacrifices required of players to compete at the highest level.

END_OF_DOCUMENT_TOKEN_TO_BE_REPLACED

Mushi shared a photo of DK’s line up, and DK officially accepted the new line-up.

“After days of speculations, we inform you that we have finalized our roster. Please, welcome Mushi, iceiceice and LaNm in our line-up. They will play alongisde BurNIng and Dai”

Although iceiceice seemed to have no intention of leaving Team Zenith, those who watched his livestream on twitch the day before may not be surprised as he showed unusual behavior of not talking and staying silent during the entire stream. He too did practice offlane – his new position in DK – during the stream, despite of his normal and comfortable position being mid. 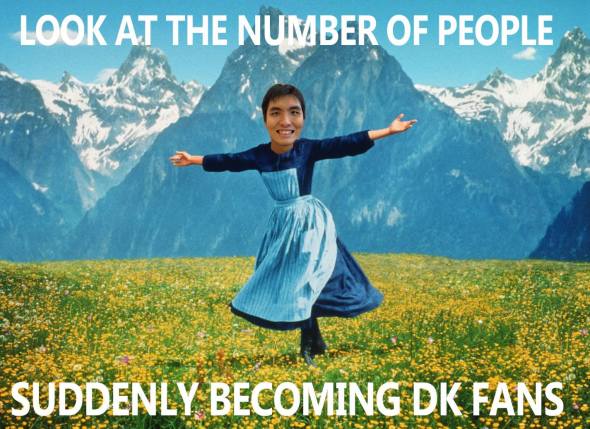 iceiceice had mentioned that all-star teams will not work out during one of his livestreams, and he had shown rather negative attitude towards Mushi’s departure to China. So did some of the fans.

However, majority are happy to see the formation of ultimate Asian team to beat the Alliance – who showed outstanding results during the TI3.

No information or posts about the future of Team Zenith has been given.

Welcome Geomancer. Meepo is back in 6.80
Level 3 ultimate + Death timer reduction is the best buff Meepo can get ever.

Dota is not a game you exactly follow the rules and regulations, you have to flexible and must be able to make decisions by yourself according to the situation.
Hopefully, this guide will be able to help you develop decision skills to determine what to buy and do according your situation.

Read only Bold&Underlined if you are in a hurry
This is snowball Meepo build.

END_OF_DOCUMENT_TOKEN_TO_BE_REPLACED

There are easy, simple things you can do to dramatically improve lag issues in Dota 2! (in terms of both latency issues and client lag due to lack of hardware power)

This is pretty much telling the computer to do certain things when you start up the game.

In your Steam libary, right click Dota 2 and go to Properties 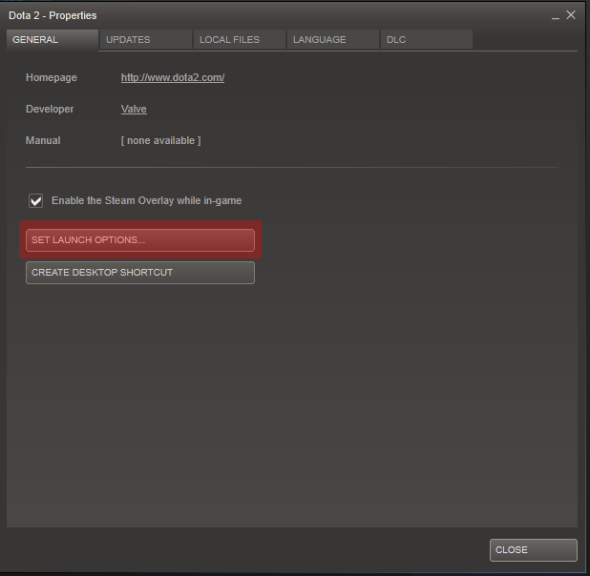 Write out the instructions you wish to give (separated by space). Effective ones are as follows :

-novid : This doesn’t show the intro video (bald valve guy)
-console : This give access to dev console when you press `(on default)
-nod3d9ex : Disable DX9 Rendering. Improves performance significantly if your GPU is not strong enough. Setting graphic option windowed full screen or exiting to desktop  cause freezing in Windows 7/Vista.
-dxlevel 81 : Forces use of DX8.1, significantly increase fps.
-high : Makes sure DOTA 2 is high priority in Windows. This can lead to mouse lag, crashing during game or post game.
-noforcemaccel : Disable Mouse acceleration

cfg files are configuration files that allows you to set all those small little things in game, which actually improves the performance dramatically.
This is valid only for Source Engine games, which includes Dota 2!
There are key configurations that actually have effects in real-life situations

2. Create a file named autoexec.cfg
This is where you type out the configurations you want to make.

Copy all the configurations above and paste it in autoexec.cfg! 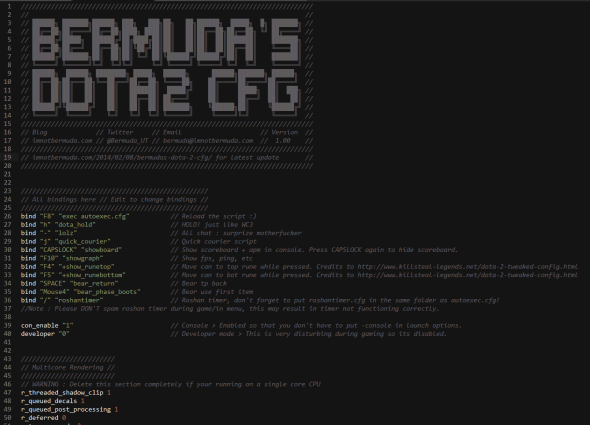 CFG’s possibilites do not end here. You can make the courier boost, pick your items, deliver it to you and tell your teammates that you’re using courier by pressing a single key. Trouble remembering when the Roshan will spawn? Simply use roshan timer script to keep yourself concentrated in game. You can even track fps and ping status real time on your display during game! Settings which are not available in in-game settings are all made in CFGs too.

I’ve made a useful CFG file with all the mentioned features and much more. If you are interested, feel free to check this post for more cfg!

– This used to be the final solution because it used to be free. Since its no more, I will just replace the topic with VPN service for games

One of the services is provided by Mudfish – Solving latency issues in games using MUDFISH . I have tried, and it works like wonders!
Another famous alternative is WTFast and BattlePing. Although I have never tried any of those, they have numerous famous reviews and solid user base.

I cannot suggest any other VPN solutions since there hardly is any free VPN for games and I have not tried any of the paid services (not willing to pay for such thing.. yet!).

Originally intended for WoW, works for all.

It is easy and simple to install, does not bug up your internet connection, purely does what it is supposed to do.

This is a solution suggested by DRiVER. I have personally tested it for a while, it worked for me. Thank you DRiVER for the solution!

There seems to be some problem for some Nvdia cards (with CUDA) having trouble running games and rendering textures as it is supposed to.
This results in error message “Failed to lock vertex buffer in CMeshDX8::LockVertexBuffer”, bad textures, spikes and other problems that eventually leads the game to crash.

Although the problem has not been recognized by Nvidia or Valve and there seems to be some strong debate ongoing between the community and Nvida. However, this is not a post to fire shots on Nvidia or debate over CUDA, I will just provide the solution which fixed the problem (spikes and “Failed to lock vertex buffer in CMeshDX8::LockVertexBuffer”) for me.

2. Click on Manage 3D Settings and go to Program Settings

3. Set the program as Dota 2. Find it from the drop box. If there isn’t one, add dota.exe

I hope I was able to help you out solving lag issues! Feel free to contact me for any questions!